#Watch Over Our Folders!

When plugged to a mailbox subscribed to mailing lists, Woof! captures some of the emails sent to these lists (bug reports, patches, feature requests, etc.) and expose them on a webpage.

If you love emails and mailing lists and use them for free software development, you may consider giving Woof! a try: it can serve both as a replacement for traditional issue trackers and as a kind of personal information manager, e.g. tracking patches you send to various mailing lists.

Woof! has been developed based on years of relying on the Org mailing list for Emacs Org-mode development: I hope it can be useful to other projects too. 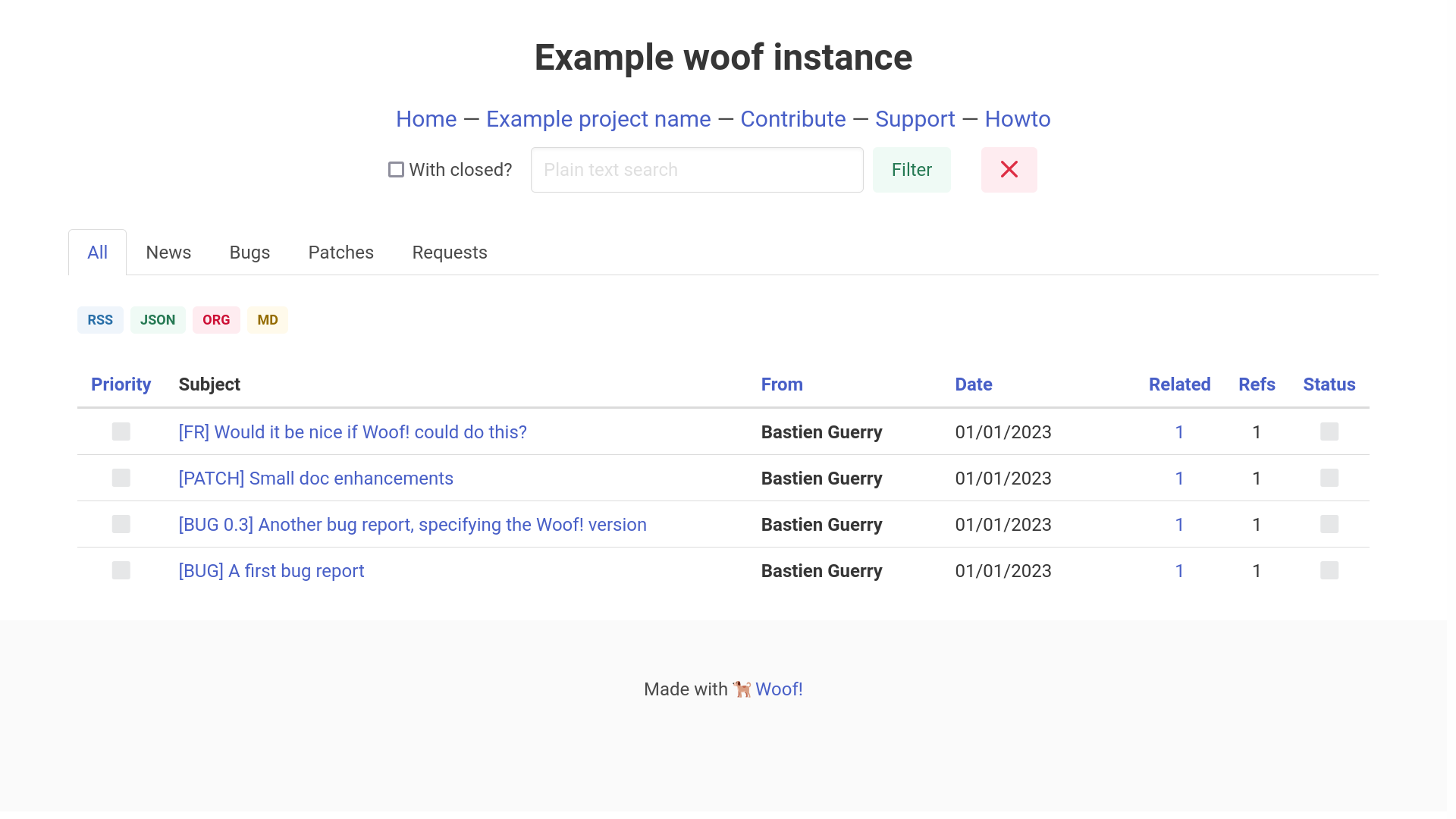 CAVEAT: Woof! is still in alpha, things can move.

See this howto for basic instructions on how to use Woof!

#We don't want no issue tracker

At some point, you may need to track bug reports, patches, etc.

This is where Woof! comes in handy as a way to monitor mailing lists.

You plug Woof! into your mailbox, it monitors emails sent to mailing lists this mailbox is subscribed to and it extracts and exposes useful information: bug reports, patches, changes, announcements, etc.

Woof! is not a full-fledged project management tool: e.g. it does not allow someone to assign tasks to someone else, to close reports, etc. If you really need such tools, Woof! is not a good candidate.

There is no roadmap as I develop Woof! in my spare time, but here is a list of ideas for future versions.

You will need a mailbox accessible via IMAP that Woof! will monitor.

This mailbox must receive mails sent to the mailing lists Woof! will monitor and must also be able to send emails.

See the environment variables in <config_example.edn> for setting the email information.

You can install Java with ~$ apt install default-jre or refer to your distribution instructions.

Once you are done configuring Woof!, you can check your configuration with:

Build and deploy with:

Build and deploy with:

If you like Clojure(script), please consider supporting maintainers by donating to clojuriststogether.org.

Woof is released under the EPL 2.0 license.