A fork of https://github.com/ekzhang/rustpad with remote code execution capabilities
~gagbo/public-inbox

Most of the work has been done by ekzhang on github.

Rustpad is an efficient and minimal open-source collaborative text editor based on the operational transformation algorithm. It lets users collaborate in real time while writing code in their browser. Rustpad is completely self-hosted and fits in a tiny Docker image, no database required. 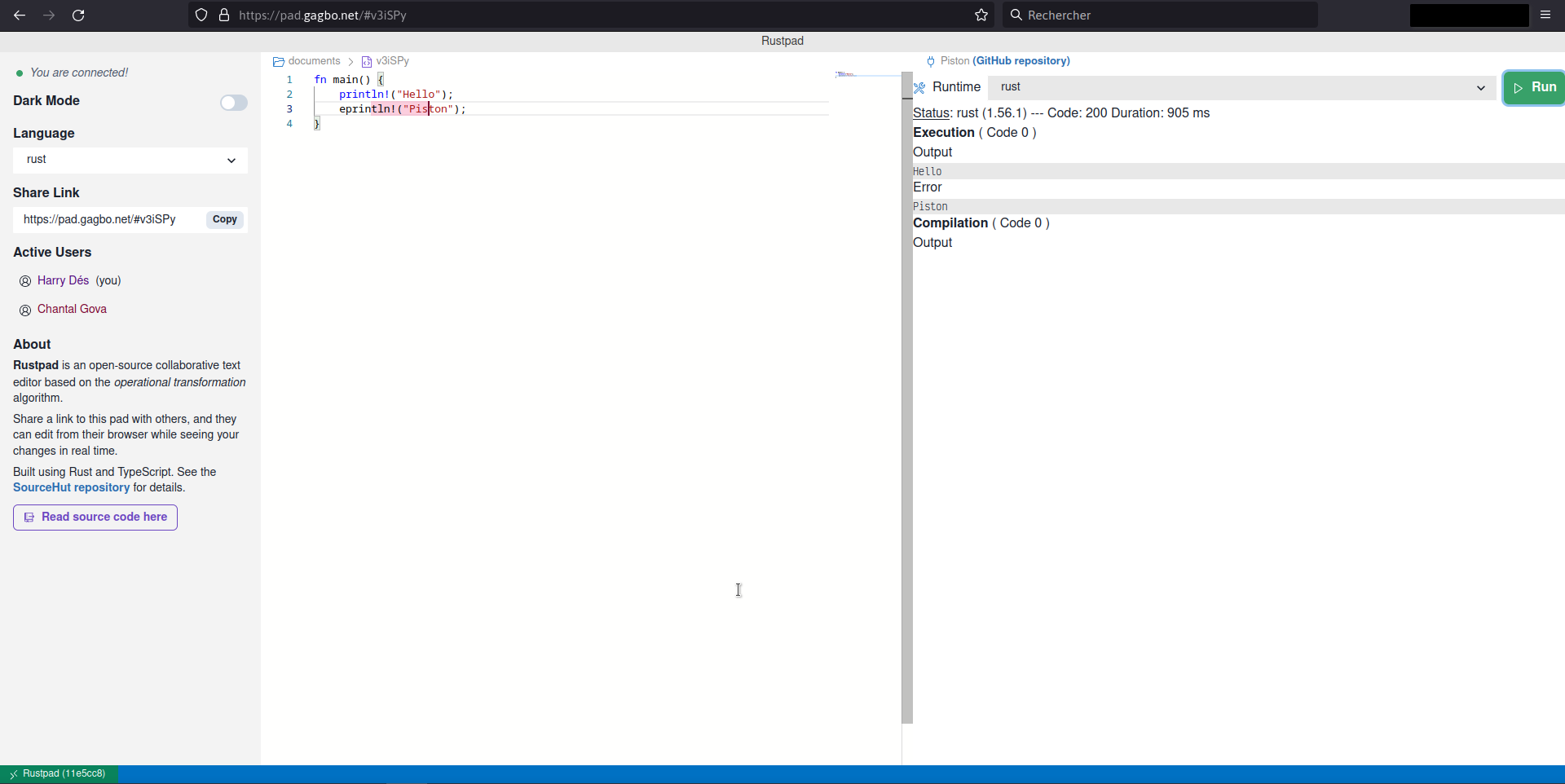 The server is written in Rust using the warp web server framework and the operational-transform library. We use wasm-bindgen to compile text operation logic to WebAssembly code, which runs in the browser. The frontend is written in TypeScript using React and interfaces with Monaco, the text editor that powers VS Code.

Architecturally, client-side code communicates via WebSocket with a central server that stores in-memory data structures. This makes the editor very fast, allows us to avoid provisioning a database, and makes testing much easier. The tradeoff is that documents are transient and lost between server restarts, or after 24 hours of inactivity.

The server additionally holds an optional client to Piston, a safe and generic remote code execution engine to allow all users to run the code in the shared editor.

To run this application, you need to install Rust, wasm-pack, and Node.js. Then, build the WebAssembly portion of the app:

When that is complete, you can install dependencies for the frontend React application:

Next, compile and run the backend web server:

While the backend is running, open another shell and run the following command to start the frontend portion.

This command will open a browser window to http://localhost:3000, with hot reloading on changes.

To run integration tests for the server, use the standard cargo test command. For the WebAssembly component, you can run tests in a headless browser with

Although the default behavior of Rustpad is to store documents solely in memory and collect garbage after 24 hours of inactivity, this can be configured by setting the appropriate variables. The application server looks for the following environment variables on startup:

Rustpad is distributed as a single 6 MB Docker image, which is built automatically from the Dockerfile in this repository. You can pull the latest version of this image from Docker Hub. It has multi-platform support for linux/amd64 and linux/arm64.

(You can also manually build this image with docker build -t rustpad . in the project root directory.) To run locally, execute the following command, then open http://localhost:3030 in your browser.

A demo version with a limited number of runtimes is available on pad.gagbo.net, deployed manually using the shipped docker-compose file as a base, on a self-managed small server.

Using the basic docker-compose setup of Piston, you typically would have to use PISTON_URL=http://localhost:2000/api/v2 to have access to Piston execution panel in the application.