This is a minimalistic Pythonwrapper for the MPI-FFTW. As every human achievement, it is created out of dissatisfaction with existing solutions.

Minimalistic means, that this wrapper will not wrapp every functionality the FFTW offers. Probably just the 1D transforms.

This wrapper is tied to numpy and only accepts numpy arrays as payload.

Please note the following: MPI-FFTW only works as distributed memory FFT. This means each node locally allocates and fill the slice of the array to transform. While FFTW will take care of synchronizing the work and computing valid results, these results will be spread over all nodes, each only having a local slice of the result.

The FFTW is not responsible for reassembling the array. That's why this wrapper has been created: It is intended for users who want to transform arrays small enough to fit into a single node's memory, but whose transforms are so work intensive that MPI parallelization might still pay off.

Keep in mind that when using with MPI, after executing a plan, only the process with MPI rank 0 will have valid data.

See the below section "MPI Distribution" for details.

(That's probably not what FFTW has been created for, since transforms are the more efficient the larger the arrays are. But I don't care. Plus we needed this for an internal research project.)

Compilation is also a bit tricky. Have a look at mpi.md for details. 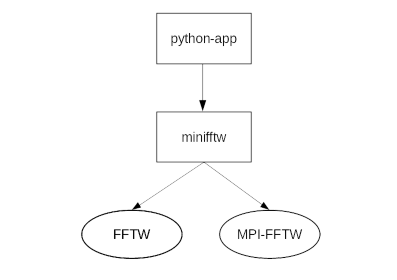 Minifftw is a wrapper either around the fftw3, or fftw3-mpi, depending on how you build it. It uses the FFTW in threaded mode, therefore resulting in hybrid mode when using MPI. Of course, you could set the number of threads to one and emulate the behavior of a pure MPI-FFTW.

Therefore, the great advantage is that you can use mfftw the same way for both with and without MPI.

According to tests on AMD64 on Debian and Arch Linux, mfftw generates valid results. Therefore the project is judged to be ready for productive use.

Run the test sanity.py with parameters of your choice to check behavior on your system. The script should be self explaining ;)

The API will most likely remain stable, though minor changes in a functions behavior might get implemented.

Please send a patch if you want to see your cluster supported.

On your system, you'll need the following components:

OpenMP (without 'I') is not required, as this wrapper uses the FFTW with POSIX threads.

On a typical linux distro, the required packages might be called:

See in clusters for a list of the supported clusters. The folder also contains sub-READMEs which are customized to the cluster and will hopefully help you getting the wrapper to run on your target.

To build, run from the main folder:

(Building on clusters might be rather complicated. We have not yet tried meson support).

See in tests for examples.

Available flags are: None.

Init will initialize the FFTW and, if compiled with it, the MPI. Only when using MPI you need to pass sys.argv, otherwise you could pass an empty list []. It is, however, recommended to always pass sys.argv

Tries to import the system wisdom. Broadcasts it to the other processes when using the MPI version.

Either rises an exception in case of an error or silently ignores the error (MPI).

Tries to import wisdom from the specified filename. Either rises an exception in case of an error, or silently ignores the error (MPI).

If build with MPI, this function also distributes the wisdom to all processes.

Creates or overwrites the wisdom-file where the argument path points to. Either rises an exception in case of an error, or silently ignores the error (MPI).

If build with MPI, this function gathers wisdom from all processes before storing.

Note that the underlying FFTW function uses int to indicate the array's size, therefore, on most platforms, you'll be limited to a maximum array size of 2^31 - 1 (roughly two billion) complex numbers.

Be also aware that the underlying FFTW-plan-function might overwrite your arrays contents during planing. Therefore, you should initialize the array with the actual payload after this function (and all other plan-functions working on the same array) has returned.

And, last but not least: As with C-FFTW, do not resize the (numpy) arrays after creating a plan on them, except when you delete the plan before doing so. Otherwise, undefined behavior might occur.

When using with MPI, only the process with MPI-rank 0 will generate valid output.

Returns: The MPI-Rank (integer) of your application when build with MPI, 0 otherwise.

For convenience, this function also exists when you don't build for MPI usage. So you don't have to change your code.

Deallocates all resources used by FFTW and MFFTW. If built with the MPI version, this function will terminate all your applications. This is done due to some inconveniences described in MPI. So, make sure your simulation has stored its results and closed all file descriptors prior to calling this function.

The first call (m.init()) is very important when using MPI: It will take your environment and pass it to the MPI_Init() function. Also, this function will configure the number of threads the FFTW uses to heat up your machine.

Like in pure C-FFTW, it's very important to initialize your array with your actual payload data after creating the plan.

The plan function will prepare everything the FFTW needs to operate and pack it into a python-capsule, which later has to be passed to all following mfftw functions.

Once you are done transforming everything you wanted, call the finit() function to terminate MPI properly. When building the MPI-version, finit() will terminate all your processes. So, make sure you saved everything before this call.

Note: You can and should call init() and finit() regardless whether you use the MPI version or not. This way, you will never have to adjust your python code when using this wrapper, even when you'll run it on a cluster.

As hinted by the introduction, MFFTW uses a hacky trick to make FFTW easier to use for end users. Transparently for the user, it distributes the Lehnsherr process's array to the Lehnsmann processes before executing, and collects the data again after executing.

On the other hand it completely frees the user from having to deal with MPI manually.

Imagine you have an array of 4 million entries. You start your simulation on 4 MPI processes. This will happen:

You can execute as often as you want, but only the Rank 0 process will have valid data in the end.

You can handle this very easily i.e. this way:

Once the MPI wrapper is build for your target, there are only a few things to keep in mind, which mostly have to do with MPI itself, not the wrapper.

All functions in this wrapper take MPI into account when being called by your python code.

For example, import_wisdom will check if the calling process has MPI rank 0. If it does, it will import the wisdom and broadcast it to your other processes. Therefore you usually don't have to check your rank, except when storing or printing a result array.

Especially, do not call MiniFFTW functions wrapped into rank checks.

Tasks can be started as usual either with

or with a cluster manager (i.e. slurm) of your choice.

It is rather tricky to get the MPI-FFTW to run performantly. Have a look into mpi-performance to get some tips about that.

This wrapper applies a few tricks to make the usage of FFTW more easy for the end user. This results in a few points which should be kept in mind.

Additionally, keep in mind that minifftw just wraps FFTW – so the behavior documented for the FFTW will mostly also apply to this wrapper. For instance, the planner-functions will overwrite your input array with arbitrary data, so you should fill them with your payload once planing is completed.

BTW: If you should accidentally build the non-MPI version and run it, you won't see an error when running your program with mpiexec. You'd just end up spawning the same process several times, without any of them MPI-interacting.

mfftw.plan_XXX returns a python capsule (opaque data) which encapsulates the fftw data types, including the fftw_plan and a reference to your numpy arrays.

If input_array and output_array are identical, the wrapper resp. the fftw will perform an inplace transform, hence overwriting your original array.

Additionally, FFTW offers you the opportunity to pass two different arrays, but allow the library to overwrite your input-array anyways. This might help the FFTW gain performance. To enable this mode, pass minifftw.FFTW_DESTROY_INPUT as a flag in the plan creation functions.

There is a problem when rising exceptions in MPI mode if wisdom can not be imported: Only the importing process (Lehnsherr) would raise the exception, in which case the other processes would block forever waiting for answer. Therefore, currently, no exception is raised in MPI mode when wisdom import or export fails.

minifftw.finit() in combination with MPI sometimes seems to cause processes to hang temporarily. Including a sleep(1) before 'fixes' the issue. Reason unknown.

This program is free software: you can redistribute it and/or modify it under the terms of the GNU General Public License as published by the Free Software Foundation, either version 3 of the License, or (at your option) any later version.

This program is distributed in the hope that it will be useful, but WITHOUT ANY WARRANTY; without even the implied warranty of MERCHANTABILITY or FITNESS FOR A PARTICULAR PURPOSE. See the GNU General Public License for more details.

You should have received a copy of the GNU General Public License along with this program. If not, see <http://www.gnu.org/licenses/>.