9b701a3 Use string interpolation with format!

Swayr consists of a daemon, and a client. The swayrd daemon records window/workspace creations, deletions, and focus changes using sway's JSON IPC interface. The swayr client offers subcommands, see swayr --help, and sends them to the daemon which executes them.

The swayr binary provides many subcommands of different categories.

Those are commands which switch through a sequence of windows where the sequence is:

During each sequence no window will be visited twice, e.g., if some window has an urgency hint, matches the commands specification, and is also the LRU window, it's not visited once in each step 1, 2, and 3 but just in step 1.

As said, which windows match is specific to each command:

All above commands also have a flag --skip-lru-if-current-doesnt-match which is like --skip-lru but skips the LRU window only if the currently focused window is no matching window (by app name, mark, or criteria). Note that switch-to-urgent-or-lru-window has this flag for purely technical reasons but it has no effect there.

The switch-to-app-or-urgent-or-lru-window can be conveniently used to define switch-to-or-start commands for your favorite applications, e.g., I have those:

Those spawn a menu program where you can select a window (or workspace, or output, etc.) and act on that.

All menu switching commands (switch-window, switch-workspace, and switch-workspace-or-window) now handle non-matching input instead of doing nothing. The input should start with any number of # (in order to be able to force a non-match), a shortcut followed by a colon, and some string as required by the shortcut. The following shortcuts are supported.

Those commands cycle through (a subset of windows) in last-recently-used order.

These commands change the layout of the current workspace.

Swayr supports most of the criteria querys defined by Sway, see section CRITERIA in man sway(5). Right now, these are:

In addition to the simple criteria listed above, criteria queries can be combined using and, or, and not with the syntax:

Obviously, criteria may be nested, so this is a valid one: 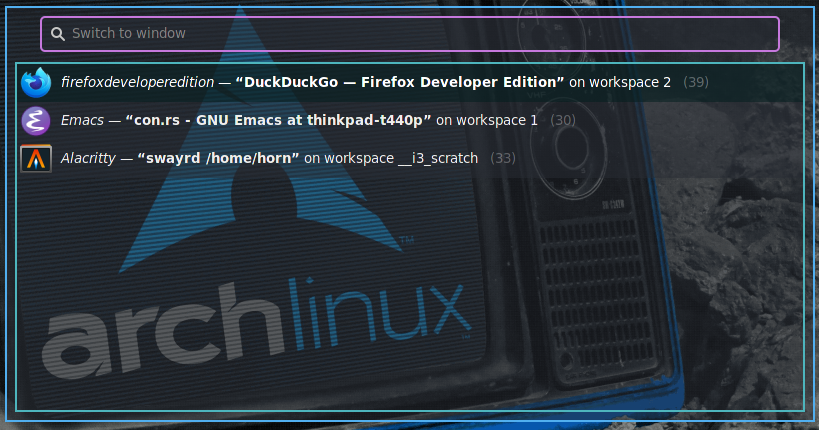 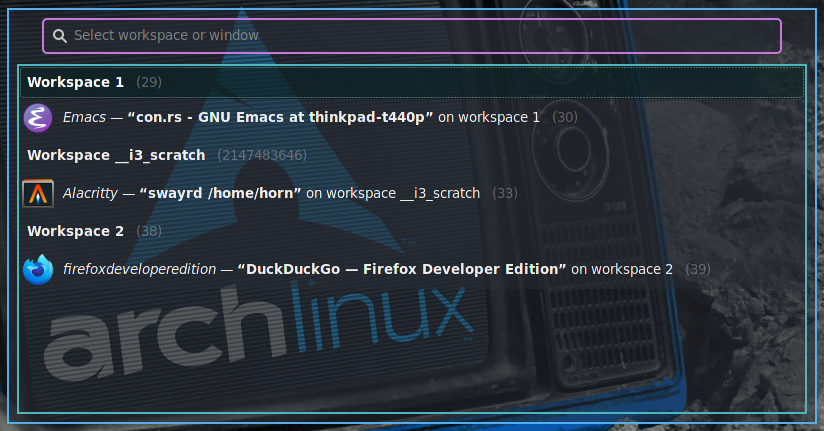 Some distros have packaged swayr so that you can install it using your distro's package manager. Alternatively, it's easy to build and install it yourself using cargo.

The following GNU/Linux and BSD distros package swayr. Thanks a lot to the respective package maintainers! Refer to the repology site for details.

For getting updates easily, I recommend the cargo cargo-update plugin.

You need to start the swayr daemon (swayrd) in your sway config (~/.config/sway/config) like so:

The setting of RUST_BACKTRACE=1, RUST_LOG=swayr=debug and the redirection of the output to some logfile is optional but helps a lot when something doesn't work. Especially, if you encounter a crash in certain situations and you want to report a bug, it would be utmost helpful if you could reproduce the issue with backtrace and logging at the debug level and attach that to your bug report. Valid log levels in the order from logging more to logging less are: trace, debug, info, warn, error, off.

Beyond starting the daemon, you will want to bind swayr commands to some keys like so:

Of course, configure the keys to your liking.

Pending a fix for Sway issue #6456 or a merge of Sway PR #6920, it will be possible to close a sequence of non-menu switching commands or window cycling commands using a nop command bound to the release of the $mod key. Assuming your $mod is bound to Super_L it could look something like this:

Until then, there's the focus.auto_nop_delay option which see below in the Configuration section.

If no config files exists, a simple default configuration will be created on the first invocation for use with the wofi menu program.

It should be easy to adapt that default config for usage with other menu programs such as dmenu, bemenu, rofi, a script spawning a terminal with fzf, or whatever. The only requirement is that the launcher needs to be able to read the items to choose from from stdin and spit out the selected item to stdout.

In the following, all sections are explained.

In the [menu] section, you can specify the menu program using the executable name or full path and the args (flags and options) it should get passed. If some argument contains the placeholder {prompt}, it is replaced with a prompt such as "Switch to window" depending on context.

In the [format] section, format strings are specified defining how selection choices are to be layed out. wofi supports pango markup which makes it possible to style the text using HTML and CSS. The following formats are supported right now.

It is crucial that during selection (using wofi or some other menu program) each window has a different display string. Therefore, it is highly recommended to include the {id} placeholder at least in container_format and window_format. Otherwise, e.g., two vertical splits on the same workspace or two terminals (of the same terminal app) with the same working directory (and therefore, the same title) wouldn't be distinguishable.

Hint for rofi: rofi supports icons with the syntax "<text>\u0000icon\u001f<image-file>", so a suitable window_format with application icon should end with "\u0000icon\u001f{app_icon}". Also note that you must enclose your window_format value with double-quotes and not with single-quotes. Singe-quote strings are literal strings in TOML where no escape-sequences are processed whereas for double-quoted strings (so-called basic strings) escape-sequences are processed. rofi requires a null character and a PARAGRAPH SEPARATOR for image sequences.

Hint for fuzzel: I've been told that fuzzel supports the very same icon syntax as discussed for rofi above.

In the [layout] section, you can enable auto-tiling by setting auto_tile to true (the default is false). The option auto_tile_min_window_width_per_output_width defines the minimum width in pixels which your windows should have per output width. For example, the example setting above says that on an output which is 1600 pixels wide, each window should have at least a width of 780 pixels, thus there may be at most two side-by-side windows (Caution, include your borders and gaps in your calculation!). There will be no auto-tiling doesn't include your output's exact width.

If auto_tile is enabled, swayr will automatically split either vertically or horizontally according to this algorithm:

There is one caveat: it would be nice to also trigger auto-tiling when windows or containers are resized but unfortunately, resizing doesn't issue any events over IPC. Therefore, auto-tiling is triggered by new-window events, close-events, move-events, floating-events, and also focus-events. The latter are a workaround and wouldn't be required if there were resize-events.

In the [focus] section, you can configure the amount of time a window has to keep the focus in order to affect the LRU order, the lockin_delay (specified in milliseconds). If a given window is only briefly focused, e.g., by moving the mouse over it on the way to another window with sway's focus_follows_mouse set to yes or always, then its position in the LRU order will not be modified.

In the [misc] section, there's the auto_nop_delay option. When some swayr command is executed, this amount of milliseconds is waited before a nop command (see the commands documentation) is executed in order to break out of a next-*-window/prev-*-window sequence or a switch-to-*or-urgent-or-lru-window cycle automatically. If another swayr command is executed within this time frame, the auto-nop execution will be delayed for another auto_nop_delay milliseconds. If this option is not specified explicitly, no automatic nop commands will be executed.

A more elegant solution using a key release binding is discussed at the end of the Usage section. However, that requires a PR to sway which has not been merged so far.

The seq_inhibit boolean controls how swayrd behaves during a sequence of window cycling commands.

Note that the key release binding solution lends itself to using seq_inhibit=true.

Since version 0.8.0, I've started writing a NEWS file listing the news, and changes to swayr commands or configuration options. If something doesn't seem to work as expected after an update, please consult this file to check if there has been some (possibly incompatible) change requiring an update of your config.

swayrbar is a status command for sway's swaybar implementing the swaybar-protocol(7). This means, you would setup your swaybar like so in your ~/.config/sway/config:

swayrbar, like waybar, consists of a set of modules which you can enable and configure via its config file, either the one specified via the command line option --config-file, the user-specific (~/.config/swayrbar/config.toml), or the system-wide (/etc/xdg/swayrbar/config.toml). Modules emit information which swaybar then displays and mouse clicks on a module's space in swaybar are propagated back and trigger some action (e.g., a shell command).

Right now, there are the following modules:

I guess there will be more modules in the future as time permits. Patches are certainly very welcome!

Some distros have a swayrbar package so that you can install it using your distro's package manager, see the repology site for details. Alternatively, it's easy to build and install it yourself using cargo.

For getting updates easily, I recommend the cargo install-update plugin.

The syntax of the config file is TOML. Here's a short example with all top-level options (one!) and one module.

The refresh_interval defines the number of milliseconds between refreshes of swaybar.

The remainder of the configuration defines a list of modules with their configuration (which is an array of tables in TOML where a module's on_click).

The on_click table can also be written as inline table

but then it has to be on one single line.

Note that the window module also reacts to title change events of windows which are not current and that's a feature! For examle, consider your Emacs on workspace 1 is focused. Now you click a link in there which causes your Firefox on (the invisible) workspace 2 to open a new tab. This will cause swayrbar to display the Firefox title so you can see that your click had an effect. After at most 3 seconds, the title of the focused application will be displayed again.

The pactl module requires the pulse-audio command line tool of the same name to be installed. It supports the following placeholders:

The nmcli module requires NetworkManager and the nmcli command line tool. It can display information about the wifi connection. It supports the following placeholders:

The iwctl module requires the iwctl command line tool which comes with iwd. It can display information about the wifi connection. It supports the following placeholders:

The date module shows the date and time by defining the format using chrono's strftime format.

Version changes are summarized in the NEWS file. If something doesn't seem to work as expected after an update, please consult this file to check if there has been some (possibly incompatible) change requiring an update of your config.

For asking questions, sending feedback, or patches, refer to my public inbox (mailinglist). Please mention the project you are referring to in the subject, e.g., swayr or swayrbar (or other projects in different repositories).

It compiles, therefore there are no bugs. Oh well, if you still found one or want to request a feature, you can do so here.